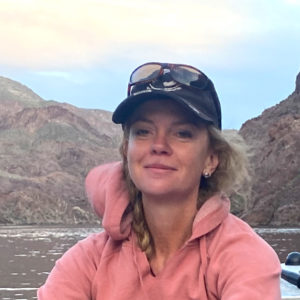 Online Campus graduate Tracey Burraston, M.A. ’18, chose to study military psychology after an all-night conversation on a porch in Colorado with an army ranger who had completed two tours in Iraq following September 11.

“His struggle with PTSD and consequent alcoholism, and his struggle with finding the necessary mental health care during this time, highlighted the massive need for effective mental-health treatment for our veterans,” Burraston said. “This guy had sacrificed so much on so many levels, yet at that time the waiting list for counseling at the local Veterans Affairs facility was extremely long, and he ended up paying out of pocket for a civilian counselor as part of his treatment program.”

The next day, Burraston was motivated to improve mental health care and treatment for veterans. She researched military psychology programs and enrolled at Adler University.

Finding Clarity and Focus in the Great Outdoors

After receiving a Master of Arts in Psychology: Specialization in Military Psychology in 2018, Burraston joined Changed By Nature Outdoors. The nonprofit based in Flagstaff, Arizona, provides outdoor opportunities to active-duty military, veterans, law enforcement officers, first responders, people with disabilities, and youth.

Changed By Nature Outdoors, “organizes river trips, camping trips, fishing trips, hikes, hunts, gold panning, horse riding, boating, and pretty much everything outdoors,” Burraston said. “We are blessed to live in such an extraordinarily beautiful area of this country, and we are surrounded by wilderness, and so the outdoors is a lifestyle rather than something we ‘do.’”

Burraston has taken groups of veterans on kayaking and camping trips down the Colorado River several times this year. “The trips are usually 10-12 miles over 3 days, and we camp on beaches going down the river,” Burraston said. “The stretches of the Colorado River that we kayak usually have limited cell service, and are true off-the-grid wilderness, so it gives participants a chance to really get away.”

Burraston said that incorporating hiking and climbing into these river trips “can be tremendously empowering for participants.” She explained that this is due to the benefits of nature and physical activity, but also because the survival and cooperation skills needed on these trips often provide a sense of “brotherhood that is seldom found outside the military.”

“There’s also something about being outside in nature and sleeping under the stars that brings clarity and focus to the present,” Burraston said.

This work with Changed By Nature Outdoors, along with her degree in military psychology and passion for helping veterans, compelled Burraston to research how alternative therapies like physical activity, sport, and nature can help veterans experiencing post-traumatic stress disorder (PTSD).

“This was an eye-opening experience for me as I’d not previously had any experience with martial arts at all,” Burraston said. “The term ‘empowering’ came up repeatedly when talking to participants in this research project. Participants described how through the practice of Brazilian Jiu Jitsu, they were able to work through their fight-or-flight response in a controlled manner.”

There is limited research available on the effects of Brazilian Jiu Jitsu on managing PTSD, Burraston said, yet it is being used as an alternative therapy in many veteran centers across the country.

Participants in the research project described how the Brazilian Jiu Jitsu group training experience also mimicked that sense of “brotherhood,” Burraston said. “They trained together and held each other accountable. Fought with each other and for each other. The training made participants not only physically stronger, but also psychologically and emotionally stronger.”

Helping Those Who Have Sacrificed

Burraston is motivated by the people, especially veterans and active-duty military, who she has met through her career and during her time at Adler University.

“I worked with some amazing classmates and professors, and we have stayed in touch,” Burraston said. She was also “lucky enough to work the entire two years” with Senior Chief Petty Officer Shannon Kent, U.S. Navy, M.A., ’18, who was killed in action in Syria on January 16, 2019.

“Shannon was a huge advocate for alternative therapies, and much of my research and work has been inspired by her,” Burraston said. “I feel it’s my obligation and duty to keep moving forward and continue the work that we did together. It’s my way of giving back to those who have given so much. In Shan’s case, she gave everything.”

President Crossman Inducted into the Chicago LGBT Hall of Fame

Students in Adler University’s Master of Arts in Counseling: Specialization in Sport & Health program in Chicago are prepared to maximize the potential of individuals and teams, as well as communities.

Harold Mosak and Bernard Shulman met in the 1940s, through Rudolf Dreikurs, the influential Viennese psychiatrist and educator who immigrated to Chicago.

Danielle Kokochak, an Online Campus Master of Arts in Psychology student, is designing a resource to address the rising risk of domestic abuse during the pandemic.