Samantha Coleman, Ph.D., wants to increase conversations about adoption in the Black community and to create a community for Black adoptees, like herself.

“There’s comfort in shared experiences,” said Coleman, Online Campus faculty and Director of Student Experience and Academic Advising. “It’s important to have these conversations because it can be healing to know that someone else is experiencing something similar. That you aren’t out here by yourself.”

Coleman found out that she was adopted at age 26. “I am what is called a ‘late discovery adoptee,’” she said. “This information can shatter your world and sense of identity and everything that you’ve known.”

For a decade, Coleman kept this new information about herself “in her back pocket” and only shared the discovery with her husband. In 2010, she began a search and reunion process to learn about her birth parents. She quickly discovered that there was a lack of information, resources, and community for people with her experience – Black adoptees adopted by Black families.

Black to the Beginning 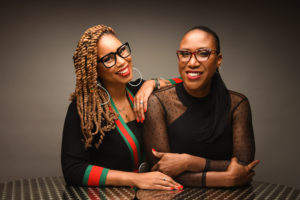 In 2016, Coleman started to tell her friends about her experience. Two years later, her friend Sandria Washington found out she was adopted at age 38 and has had a similar experience trying to find information and resources.

“We just don’t often hear about adoption in the Black community from the standpoint of formal adoption,” Coleman said. “A lot of times you hear about children who might have been taken in by a grandparent, an aunt, or a family friend. That is coined the ‘Black adoption,’ which does happen, but only focusing on it makes it seem like Black families don’t formally adopt, which between the two of us, we know that they do.”

Coleman and Washington began to ask themselves, “where are the other Black adoptees who have been adopted by Black families? Where are those voices? Who is experiencing something similar to us, but we have no idea where they are?”

They decided to create this community for themselves. In 2019, they incorporated Black to the Beginning, which grew to include a social media presence in May 2020. In November 2020, to kick off National Adoption Awareness Month, they launched a podcast to tell stories of Black adoptees, and everyone touched by adoption in the Black community.

“Although the Black adoptee is at the center of these conversations, we recognize that adoption also includes the adoptive parents, the birth parents, spouses, and friends,” Coleman said. “We try to assist everyone to get towards a space of healing, and help adoptees build a connection to their identity, where they come from, their roots.”

She said that through the podcast, which has been getting “a great reception,” she has found and connected with many people who relate to her situation. “It continues to shed a light on how adoption is simply not discussed in our community,” Coleman said.

She has pursued this as her personal social justice project, because “At Adler University, we are constantly trying to push the envelope and make our communities aware of what is being experienced by marginalized populations and engage in topics which may usually be off the table to discuss.”

“When you are an adoptee there are often feelings of not belonging,” Coleman said. “I know what it feels like to feel down or lost for adoptees in particular.” She said this is especially pertinent when you start to talk about identity.

“In the African American community, we are sort of cut off at the legs as it relates to identity,” Coleman said. “Yes, you’re African American, but your roots are not necessarily in America, and it can be difficult or impossible to trace them back to a particular tribe or area in Africa.”

She encourages Black adoptees adopted by Black families to keep moving toward their own healing, even if they don’t see a lot of information about their situation.

“It’s also important to note if you are a Black adoptee who was adopted transracially by white parents that you are a still a Black adoptee,” Coleman said. “No one knows you are adopted unless you say something, but what people do see first is that you are a Black individual. Regardless of who your parents are, there is still community in Black people even though you may have felt that there was an erasure of identity because you were brought up in a non-Black home.“

Overall, Coleman wants fellow Black adoptees to know that there is a community out there for them. “The community is here without any judgement and we recognize the pain and the stigma that comes along with adoption,” Coleman said.

By starting conversations, Coleman wants to help dispel myths about adoption within the Black community.

For example: The myth of infertility. “Historically, it has been assumed that Black women are very fertile and that they don’t have infertility issues,” Coleman said. “That’s not necessarily the case. In fact, our infertility is higher than that of our white counterparts, and that’s not talked about. But that rate means there’s more opportunity for Black families to consider adoption.”

To dispel the stigmas of adoption in the Black community, Coleman says we, as a society, must:

“If Black people can get comfortable talking about adoption without any shame about it, that’s when we get to a place where we can be able to reduce that stigma,” Coleman said. “We have to get past these myths because there are a lot of people who want to expand their families but are not considering adoption as an option for them.”

Learn More about Black to the Beginning on Instagram and listen to the podcast.

Dr. Biedermann Joins Philanthropy in the New Normal Podcast to Discuss the Impact of COVID-19 Pandemic on Children

The Social Determinants of Education

Adler University Trustee Juan Salgado, M.U.P., is President and CEO of Instituto del Progreso Latino. Salgado discusses the social determinants of health—that whether people are healthy or successful can be heavily influenced by social, economic and physical environments.