Adler University celebrates the achievements of Black people in the U.S. and Canada, recognizing their abilities to navigate structures that were not built for their success. We also acknowledge the communities that shaped these highly accomplished people, created avenues for their achievements, and supported their success. We study Black history to fill gaps in our understanding of the history of our nations, which include the lives, contributions, and struggles of Black people.

Recognizing Black history is not only a study of the past, but also of our present and future. History continues to be made, as we witnessed on January 20 when Kamala Harris became the first Black woman sworn in as Vice President of the United States.

We encourage the Adler University community across campuses and the public to join us this Black History Month to learn, participate, and celebrate. 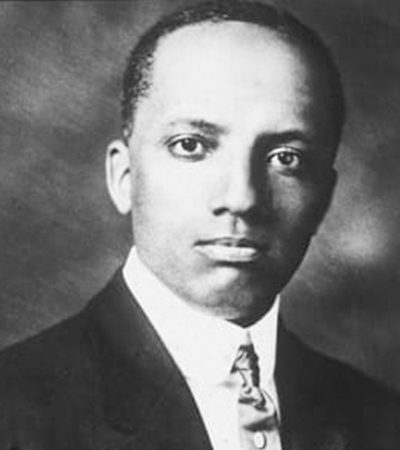 Black History Month is an annual celebration, originating in the U.S., to recognize the contributions and accomplishments of Black people.

Distinguished Black historian Carter G. Woodson, Ph.D. was inspired to promote the study of Black history after participating in a national celebration of the 50th anniversary of emancipation in Chicago in 1915. In February 1926, Dr. Woodson launched a week-long celebration of Black history. He dedicated his career to the study and sharing of African American life. Learn more from the Association for the Study of African American Life and History.

Some U.S. communities began expanding the week into a month-long celebration in the 1940s. Black History Month was officially recognized by the U.S. government in 1976 and by Canada in 1995.

“If race has no history, it has no worthwhile tradition, it becomes a negligible factor in the thought of the world, and it stands in danger of being exterminated.” – Dr. Carter G. Woodson.

Join us for the many Black History Month events happening across Adler University.

We recognize and are grateful for the many Black psychologists, leaders, and advocates who shaped our fields of psychology, mental health, and social justice. Here are a few:

Jennifer van Wyck, M.A. ’10, works in areas of the Middle East formerly controlled by the Islamic State (IS) group to help women who have experienced violence and their communities to heal.

National Indigenous History Month was established to acknowledge and honour the histories, heritage, and diversity of First Nations, Inuit, and Métis communities—a time to learn from and with Indigenous knowledge-holders and to recognize and celebrate the unique and diverse strengths, voices, and contributions of Indigenous peoples.

Would Winning the World Cup Make a Difference for Gender Equality?

Piotr Piasecki, and his classmates in the Master of Arts in Counseling: Specialization in Sport and Human Performance program in Chicago, use their focus on sport and health psychology to advocate for social justice in the sport field.