June is recognized as Pride Month in the U.S. and in Canada, and in countries around the world. It is a time to honor the anniversary of the Stonewall Riots and the activists who have been instrumental in the continued fight for 2SLGBTQIA+ rights, visibility, and equality. It is also a time for the 2SLGBTQIA+ community to come together to celebrate diversity, uniqueness, self-affirmation, and self-expression.

Pride Month is celebrated via parades and other events throughout the summer across the U.S. and Canada. We recognize that some events will be virtual again this year, so we want to share ways to celebrate, support, and take action, both virtually and in-person.

We also want to share resources and advocacy actions to fight against hate and discrimination and promote inclusion and equality for all. We encourage the Adler University community across campuses to learn, support, and take action.

The first Pride was a protest. The Stonewall Uprising began on June 28, 1969, when police raided the Stonewall Inn, a gay club on Christopher Street in New York City’s Greenwich Village. Raids like this were common as police enforced many anti-LGBTQ laws and regulations. Patrons and neighbors were fed up with this targeted policing happening across the country and fought back. The raid sparked six days of protests and clashes with law enforcement and is known as a tipping point and catalyst for the modern gay rights movement in the U.S. Learn more about the Stonewall Uprising from HISTORY and the Library of Congress and about the gay rights movement throughout history.

One year later, the first Pride march in New York City took place on June 28, 1970, to commemorate the anniversary of the uprising and was known as Christopher Street Liberation Day. Around 3-5,000 marchers participated in the inaugural New York City celebration. Today, millions of LGBTQ+ people and allies gather in June to march and celebrate Pride across the country and world. Pride Day is on June 28 on the anniversary of Stonewall, but Pride is celebrated throughout the month of June and on different days in different communities. Learn more about the history of Pride from the Library of Congress and Them.

We celebrate the individuals who were on the frontlines of the Stonewall Uprising and beginning Pride celebrations and have paved the way for future celebrations and social change. We especially want to recognize the BIPOC activists and leaders who are not always acknowledged for their significant contributions to the fight for 2SLGBTQIA+ rights, equality, and liberation. 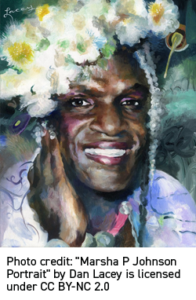 Marsha P. Johnson, co-founder of the Street Transvestite Activist Revolutionaries (STAR), was a self-identified drag queen, performer, and influential trans and LGBTQ+ rights activist. Though often forgotten as one of the leaders, Johnson played a pivotal role in the Stonewall Uprising and continued fight for LGBTQ rights.

Her drive for creating a community for transgender youth came after her participation in the Stonewall Uprising when she attended rallies and meetings for the Gay Liberation Front and noticed that transgender people were often left out of the conversation.

STAR, founded by her and Sylvia Rivera, offered a safe haven for transgender and gender non-conforming people. In 2019, a statue was created in her and Rivera’s honor, the first monument to honor trans women in New York City.

Read more from Women and the American Story. 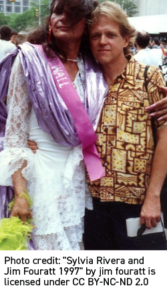 At the time of the Stonewall Uprising, Sylvia Rivera had already been involved in activism in the Black Liberation and the peace movement. She was a patron of the Stonewall Inn the night of the raid and participated in the protests for six nights, refusing to leave.

When Pride parades began taking place, Rivera and other transgender people were excluded and discriminated against, which made her more passionate to advocate for transgender rights.

After founding STAR with Marsha Johnson, Rivera would go on to fight against the exclusion of transgender people from the Sexual Orientation Non-Discrimination Act, which passed in 2002.

Brenda Howard, known as “The Mother of Pride,” was a pioneering bisexual activist who was instrumental in starting the first pride parades. She was an active participant in the Gay Liberation Front and Gay Activists Alliance and was friends with many people involved in the Stonewall Uprising.

She organized a rally to commemorate the one-month Stonewall anniversary and then, with a committee, planned Gay Pride Week and the Christopher Street Liberation Day Parade for the one-year anniversary. These events evolved into the annual New York City Pride march and helped spark later pride celebrations around the world.

Read more from Them.

Gilbert Baker was a world-famous political activist, designer, and flag maker who created the Rainbow Flag, which lives on as a universal symbol of the LGBTQ+ movement. After completing his military service and was discriminated against as a gay man, Baker created banners and flags for anti-war and pro-gay marches and created the Rainbow Flag at the suggestion of friends, including Harvey Milk.

The flag made its first appearance in 1978 at the San Francisco Gay Freedom Day Parade. Throughout his life, Baker continued creating flags, banners, and art, receiving numerous accolades, and often serving as grand marshal for LGBTQ pride events.

The 2019 Adler University class of Chicago and Online Campus students graduated on October 20. Victoria Stewart, a graduate of the Master of Public Policy: Human Rights Advocacy Program in Chicago, spoke at the commencement ceremony at the Chicago Theatre.

Nazanin Fasihi cites her grandmother for instilling in her a call to help others. A philanthropist and role model for her granddaughter, she would help strangers furnish their homes with basic necessities.