From Istanbul to APA: Changing the Narrative for Immigrant Women

When Aslihan Tuzun started studying psychology in 2009, she was more than 5,000 miles away from the Adler University Chicago Campus. Thirteen years later, her experiences and interest in the field have come full circle.

After one giant leap of courage, a school transfer, and five years of refining her research, Tuzun’s hard work paid off, as she will present her doctoral dissertation at this year’s American Psychological Association (APA) Convention on behalf of the Division of International Psychology (52) in August. 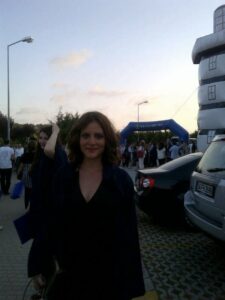 Tuzun at her undergraduate graduation at FMV Işık University in Şile, Turkey.

Growing up in Istanbul, Turkey, Tuzun was a self-proclaimed “bookworm” with a particular interest in her father’s philosophy books. Her first favorite book, Sophie’s World, explored hard questions such as, “who are you?” and “where does the world come from?” As she grew older, her interest in how humans think and behave started her on the path to earning a bachelor’s degree in psychology and a master’s degree in clinical psychology from Okan University in Istanbul. This summer, Tuzun will graduate with her Psy.D. in clinical psychology from Adler Chicago – but her path here was nothing ordinary.

Upon graduating with her master’s degree, Tuzun became a licensed therapist and provided services through private practice, college counseling, and the Turkish Red Crescent, the largest humanitarian organization in Turkey.

She remembers a vivid moment in the classroom, in which a psychology professor mentioned studying in Chicago, and thought to herself it would be a fascinating experience.

Knowing she would need to get a new practicing license upon coming to the United States, Tuzun left her home in Istanbul and headed for Chicago.

“I was thinking, I’m either going to take this opportunity, or regret it for the rest of my life. So, I quit my job and left private practice and moved.”

Today, Tuzun is one of two Adler students from the Chicago Campus who are preparing to present their dissertations at the national APA conference in August.

Her research, titled Empowerment as a Predictor of Resilience Among Migrant Women in the U.S., is extremely personal to her, as it examines the structures that empower immigrant women like herself.

Before transferring to Adler, Tuzun began her research as a doctoral candidate where she noticed prior research on immigrant women almost always focused on the negative risk factors and barriers they face. Her goal was to identify structures and factors that make the woman immigrant experience work, in order to build fortitude for future women like her.

“Especially with women’s studies, research is off-balance,” said Tuzun. Women are often portrayed as weak and dependent. I wanted to put it out there that if certain things happen, we are actually very strong.” 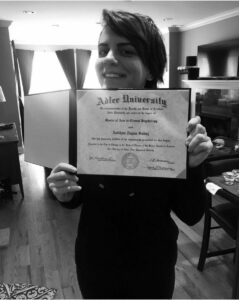 Tuzun with her master’s degree in clinical psychology from Adler University. She earned this degree in 2020.

Her research examines over 150 immigrant women and how social resilience and adaptive capacities might lead to positive health outcomes for women immigrants in the U.S. – a stark change in previous studies that focus on the adverse impacts on health due to migration.

Tuzun says she is looking forward to the APA Conference, even more so because she will be alongside another Adler student, Indra Gonzalez, who will be presenting on the psychological well-being of DACA recipients.

“I’m honored to share this experience with Indra because we are both presenting on immigrants in the United States,” said Tuzun. “I’ve heard the diversity at the conference is going to be very high and I’m very excited about that. It’s such an honor. It is a home-run to show what I studied and say, ‘I am here.’ My research being there is one thing, but me being there as a Turkish woman at the APA Conference is another thing.”

Borrowing the term from a professor of hers, Tuzun calls her dissertation a “me-ssertation,” because it is so uniquely aligned with her own journey. She credits her own resilience to the drive and passion that has kept her fueled all these years.

“A Psy.D. degree takes perseverance. It’s about having the passion and not losing sight of why you started this, which can be easy when you’re in the midst of the workload and everything else in life. At the end of the day, we’re helping people and communities.”

Along with graduation and her presentation at the APA Conference, Tuzun is celebrating another milestone this year – becoming a United States citizen.

“My own journey from Turkey to becoming a US citizen and doctor has been about knowing and respecting the amazing parts of myself that come from my Turkish cultural heritage, while integrating those parts into my new American identity, just as countless immigrant women have done before me. I have discovered mental flexibility and the ability to embrace the discomfort of change deep within myself throughout this experience. I’ve adapted my concept of home from a geographical location to instead a part of myself that I take with me into every new experience. I carry Istanbul and my family with me everywhere I go as I traverse my American experience.”

Geoff Bathje Talks MDMA as a Therapy Facilitator with Health

The SJP Experience: Exploring Art as a Tool to Break Down Barriers

Online Campus student Daniel Merker shares his Social Justice Practicum experience at The Amarillo Museum of Art, where he worked with communities to create programs that build connections and advance social justice through art.