When one of Tess Wallace’s students expressed committing self-harm and feeling suicidal, she quickly sought help.

The student had suffered several traumatizing experiences, which sometimes came through in the teenager’s work in Wallace’s creative writing class at After School Matters, a Chicago nonprofit that provides after-school and summer programs throughout the city.

“My students, as writers, are in a unique position where they express their emotions through their work,” Wallace said. “Sometimes this includes having conversations with each other about their mental health.”

Suicidal thoughts are common among teens and young adults, according to a 2020 report by the Centers for Disease Control and Prevention. Among high school students, nearly 20% reported serious thoughts about suicide, about 16% made a suicide plan, and 9% reported a suicide attempt.

September is Suicide Prevention Month, a time to raise awareness on resources that connect those experiencing suicidal thoughts with mental health professionals.

Wallace reached out to her colleagues at After School Matters, one of whom connected her to Cara Murphy, Psy.D., director of training for the Division of Teen Wellness Opportunity (TWO) within Adler Community Health Services (ACHS) at Adler University.

She quickly learned that After School Matters and ACHS TWO had formed a strategic partnership in early 2020, at the start of the COVID-19 pandemic, to provide free, accessible mental health services to teens in marginalized communities.

“My student still uses this resource and often tells classmates about it,” Wallace said. “Yes, there are still hard days, but I truly believe this partnership and the access to mental health services saved my student’s life.” 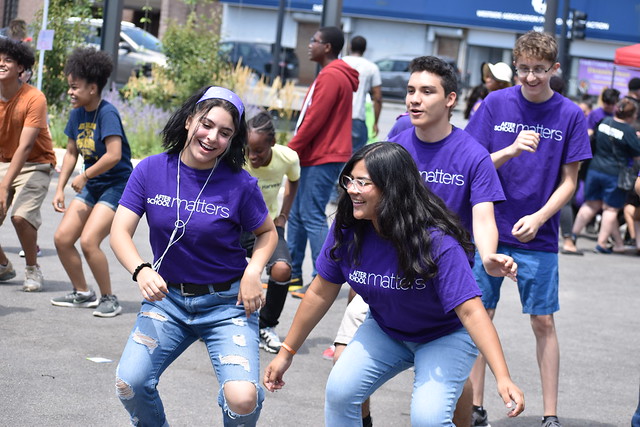 Created in 1991, After School Matters began as a summer arts program serving 260 teens on the then-undeveloped Block 37 lot in Chicago’s downtown Loop. Today, it’s grown to offering programs — from arts and sports to STEM, communications and leadership — in all 77 Chicago neighborhood areas to thousands of teens annually.

When the COVID-19 pandemic struck, it was clear it had serious implications for the mental health and well-being of the thousands of teens it served, according to After School Matters.

These students faced challenges, including social isolation, financial hardship, and food insecurity, according to a 2021 survey. About 63% of teens had some level of hesitation about returning to in-person schooling in the fall, 1 in 3 reported experiencing food insecurity, 39% were home alone during the week, 25% were providing childcare during the week, and 23% were coping with the loss of loved ones.

In addition, 15% reported that someone in their household was infected with COVID-19, and 12% were moving between multiple homes and locations.

Meanwhile, the program’s instructors and staff were hearing anecdotally from their students who were feeling elevated levels of grief, depression, anxiety, and stress.

“At their age, many of these kids already struggle with self-confidence, and some are dealing with bullying,” said Maggi Hastings, who teaches improv where at the Lutz Family Center in Kilbourn Park. “When things began to open up during COVID-19, many of my students expressed how hard it was to be social in person again. It’s so important we provide them with resources that educate them about mental health.”

Prompted by the needs of its students, After School Matters in early 2020 found a willing partner in ACHS TWO, which offers an Adler clinical psychology doctoral internship and practicum program that provides extensive clinical behavioral health services to teens in community-based programs in the Chicagoland area.

“[After School Matters] is an amazing organization on its own, reaching young people throughout Chicago. We feel very fortunate to be an extension of their work,” said Amanda O’Connell, Psy.D., who is about to complete her postdoctoral residency with ACHS TWO and was recently hired to continue her work with the ASM partnership as a supervisor.

“Going to therapy is expensive and not everyone has health insurance. We provide free therapy to teens involved in ASM.” she added. “We’ve been able to provide access to services via telehealth throughout the pandemic. That has been so impactful.” 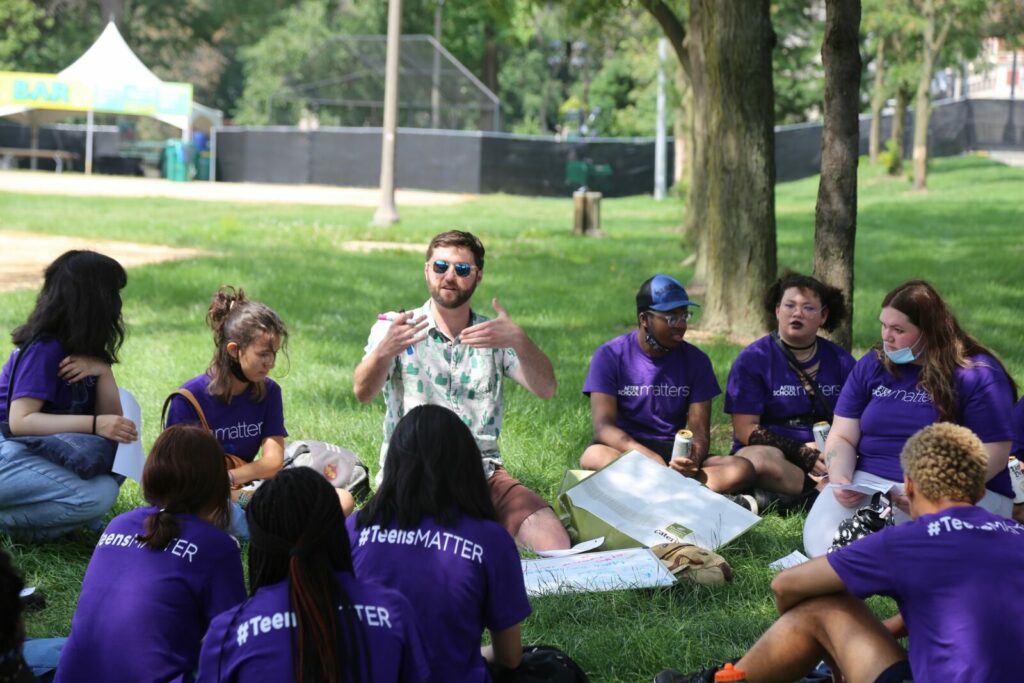 While pursuing her doctorate in clinical psychology, with an emphasis on traumatic stress, Dr. O’Connell conducted her internship with ACHS, specifically the Division of Juvenile Justice, working with the youth at the Illinois Youth Center in St. Charles, Illinois.

When Dr. O’Connell stayed on as a postdoctoral resident, the Division of Juvenile Justice evolved into the Division of Teen Wellness and Opportunity to focus primarily on youth deflection from the juvenile justice system.

“We knew that there are adolescents who have unique needs and are experiencing trauma,” said Dr. Murphy. “But how do we reach them in the community?”

The Division of Teen Wellness and Opportunity found the solution by providing psychological services to those who might not otherwise have access to them, starting with a partnership with After School Matters in the summer of 2020. Teens participating in After School Matters are 90% either Black or Latinx, with 81% living in Chicago’s high-poverty community areas.

“We’ve done everything from normalizing mental health and breaking the stigma (of getting help),” Dr. O’Connell said, discussing a variety of psycho-education group sessions she’s held with After School Matters students. “We’ve talked about bullying, self-confidence, social media, and trauma. Just being able to reach young people who may not receive these services is important to me. We are able to bring our expertise in mental health and design it to meet their needs.”

Recognizing that the pandemic had been hard on her improv students, Hastings wanted a professional mental health provider to come in and speak to them.

“I thought it would be nice to have a more knowledgeable, trained person to discuss mental health,” she said.

When another After School Matters teacher mentioned the partnership with Adler in passing, she didn’t hesitate to reach out.

“The students really responded to the session, knowing a trained professional was talking to them in a safe space,” Hastings said. “They quickly understood that it’s OK to get help and be vulnerable, that it’s not to be ashamed of.”

Offering open workshops for After School Matters teens designed to confront stigmas against discussing mental health and wellness and seeking mental health support is only one of several services the partnership is providing. Other programs include:

A few weeks after the July 4 mass shooting in Highland Park, some students participated in an active shooter drill. ACHS TWO student clinicians were on site, understanding that the drill could be triggering. Many teens in After School Matters often know of someone lost to gun violence.

Several weeks ago, Dr. O’Connell said, she was called to respond after an After School Matters instructor died.

“I offered grief support to those who worked with and knew that instructor,” she said.

Recently, Dr. O’Connell was again requested. This time a fight had broken out at school.

“Witnessing violence impacts people, so we came to offer support,” she said. “We also offer support to the instructors to empower them to support their young people.” 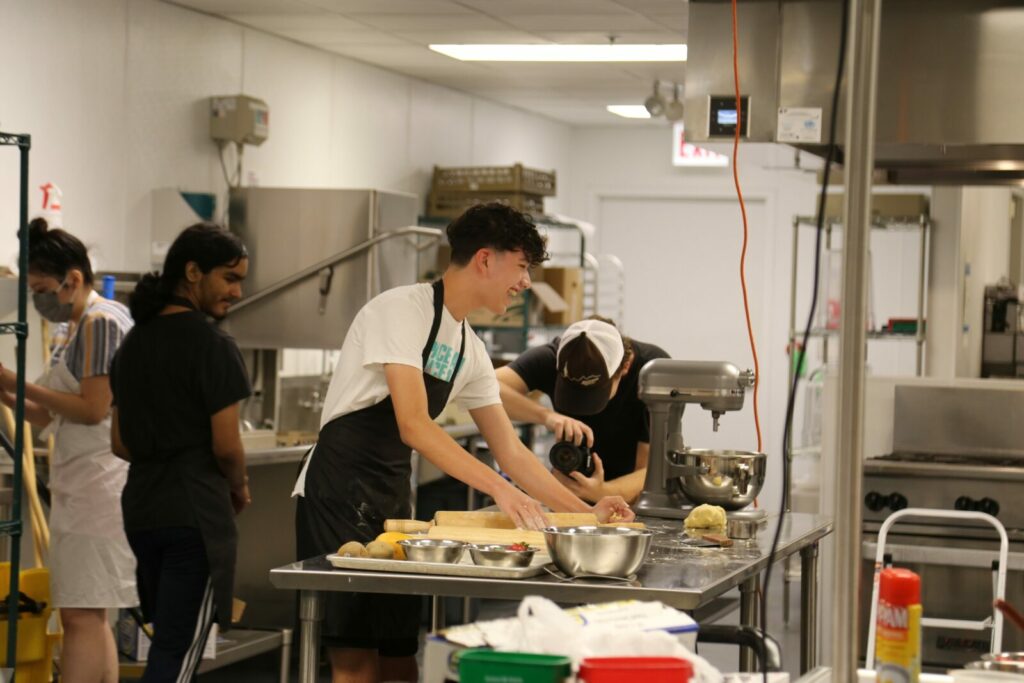 In its first year, the partnership engaged more than 800 youth and instructors. In its second year, ACHS TWO interns and externs continued to tailor workshops to proactively deal with specific topics, including grief and trauma, and supporting instructors with training to recognize and respond to mental health challenges in teens.

The teens participating in these workshops and one-on-one sessions have overwhelmingly expressed positive experiences. According to After School Matters, 91% of teens felt that mental health workshops contained information they could use in their lives, and teens reported leaving the workshops feeling “refreshed,” “calm,” and “informed.”

“Oh, I loved [the ACHS TWO student clinicians],” said one After School Matters student. “They encouraged me to go to therapy and really gave me the push I needed to go for healing or just having someone to talk to about my successes.”

“Therapy has helped me navigate feelings that have been hard for me to navigate,” said another student, who participates in individual therapy with [ACHS TWO] student clinicians. “It has helped me, and I feel like it will help others. I’m so glad I decided to invest in therapy and my mental health when I did. I feel if I waited longer, my mental health would have declined a lot.”

Moving forward, additional programs are on the way.

Dr. O’Connell, who is taking on a leadership role in the ACHS program, said she recently proposed creating a “Mindfulness Monday” program in the fall when student clinicians will drop in virtually to check in with students.

“This will be a wonderful opportunity for them to take a break, check in with themselves, and engage in some form of mindfulness exercises before they continue with their After School Matters programming,” Dr. O’Connell said, adding she’s also developing a trauma intervention program for future trainees to better inform them on how to best support young people.

The partnership will also continue its instructor workshops focused on normalizing mental health, helping them recognize warning signs, and empowering them to check in with their students.

“We recognize that the instructors spend more time with these young people more than we do,” Dr. O’Connell said. “Our goal is to help them feel empowered to be able to support the teens they work with and know when to advocate when they need more support.”

To Tess Wallace, the partnership between After School Matters and ACHS TWO is a gift.

“This partnership and the students’ access to these mental health services tell them they have someone to reach out and they’re not on their own,” Wallace said. “It has really changed the game.”

At Adler, we want to recognize several of the social justice advocates who have positively impacted both nations through their contributions and efforts for equity.

Bringing Community Voices to the Table

From her career as a cartographer to her passion for public service, Tanya Buckingham, M.A. ’16, is always looking for how she can better serve the needs of her community.

Teal Maedel, M.A. ’97, applies Alfred Adler’s teachings and Adler University’s social justice mission to her work in criminal justice. She received the 2019 Vancouver Campus Distinguished Alumni Award in April for her work to empower marginalized communities throughout her career.