‘Proud of my journey’: From Adler student to art therapy professor

When asked what they’d like to be when they grow up, children often offer seemingly impossible answers — an astronaut, ballerina, or professional athlete.

That’s the beauty of their innocence: they don’t allow the low odds, impostor syndrome, negative self-talk, or obsessing about a million little details to get in the way of their dreams. 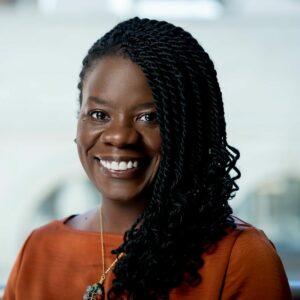 But for a young Tomeka McGee-Holloway, Psy.D., who grew up in the low-income housing projects on the northside of Chicago, her only wish was to make it to age 25. It wasn’t until she finished high school that she considered becoming a psychologist.

“But I did not think I had the fortitude or the intelligence for such an endeavor,” Dr. McGee-Holloway said.

Today, as a core faculty in the Master of Arts (M.A.) in Counseling: Art Therapy program, she has plenty to be proud of. She once returned to those housing projects as an adult and saw the Chicago downtown skyline.

“I could see the skyrises in the background,” Dr. McGee-Holloway said. “And it reminded me that I was proud of my journey.”

“While I had great dreams as a youth, I definitely did not have the confidence when I was younger, and so it took me a while to actually get my bachelor’s degree,” Dr. McGee-Holloway said.

She had been busy working in retail management and raising a family, but Dr. McGee-Holloway said she wanted something more.

So, while in her late 20s and despite being unsure of what to study, she went back to school, enrolling in Concordia University in River Forest, Illinois.

“I just enrolled and started taking classes until I discovered art therapy,” she said.

After earning her bachelor’s degree at age 30, she heard about an Adler University master’s program that combined two things she was especially interested in: art and psychology. She was accepted into the Master of Art Therapy program in 2008.

Although Dr. McGee-Holloway was balancing school with raising two young children, she completed her master’s in art therapy in two years.

“It was such a good environment,” she said of Adler. “The art therapy program was very supportive and encouraging, and it really felt almost like a family atmosphere. I was one of the only students who had kids, as most of my cohort was younger, but it still felt very supportive.”

During this time, Dr. McGee-Holloway got the opportunity to give back to a community, working on a gun prevention project with adolescent boys from Englewood. Their goal was to help show boys, who were surrounded by gang violence and drugs, what else they could be doing with their lives and help them process their emotions through art therapy exercises.

“It was so rewarding,” said Dr. McGee-Holloway. “I was so overwhelmed by the difference I was able to make in their lives.”

In 2011, Dr. McGee-Holloway found herself back at Adler, beginning her Doctorate of Psychology in Clinical Psychology.

“I would never have thought I’d have the fortitude to go through this many years of school, but going back to Adler was an easy choice,” she said. “It was just so impactful and such a great experience for me, so I figured why go anywhere else?”

Dr. McGee-Holloway with her daughter and mother.

After serving as a teaching assistant from 2012-13, Dr. McGee-Holloway became an adjunct faculty at Adler in 2014. In 2016, she became a full-time art therapy professor at Adler.

“It’s weird now because some of my former professors are now my colleagues, and I still can’t call them by their first names,” she said with a laugh. “It just doesn’t feel right.”

Dr. McGee-Holloway has even put her own spin on her practice — she sees patients one day each week — and instruction, a direction stemming from embarking on a personal self-care journey in recent years and becoming a yoga instructor.

“The mind-body connection is important to me, so I may do things sometimes that are not considered to be traditional psychotherapy,” she said. “Things like dealing with energy or crystals, Reiki, or bringing yoga into therapy. I encourage my students who are interested in non-traditional modalities to start doing research on those things. That way, when they get out into the field, they can incorporate it.”

Dr. McGee-Holloway takes her role as a professor who helps shape the next generation of mental health professionals seriously but wants to ensure her students have a well-rounded experience.

“One of my strongest suits at Adler is being an advocate for students,” she said. “Yes, it’s my job to teach them how to be a therapist, but also how to take care of themselves as they go through school and afterward as well.”

Talk about coming full circle. Dr. McGee-Holloway offers some words of wisdom to this year’s graduating class base on her educational and professional journey.

“Imposter syndrome is a real thing so I would advise students to know that they are ready and to believe in themselves,” she said. “You have made it this far and are ready to nurture and to aid in the healing of many.”